For some time now I've had an old Diana air rifle in the garage gathering dust and it's been a long time since I used it but I recently got interested again and even bought myself an air pistol.

As usual I like to have a tinker with anything I can, including my air guns.

One important tool you need when tinkering with airguns is a chronograph, this lets you check the power of the gun to make sure you don't go over the legal limit allowed for the maximum energy.

To buy a small clip on chronograph was going to cost me £49..... "hang on" I thought, I've got all the parts I need to make my own chronograph using the Jeenode.

So, the basic idea is to put two IR beams about 100mm apart in a tube and use the jeenode to time the duration between the first and second beams being broken by the pellet.

If you know the weight of the pellet, the speed and distance travelled then you can calculate the energy used to fire the pellet.

Some googling had come across a few projects form other people and given me a few good tips and even some basic code to start with.

Where my chronograph would be different was that I was going to use the RFM12B to transmit the timing information to a remote receiving station using my "alternate jeenode" and displaying the information on the GLCD.

I chose IR sensors that had a buffered logic output, this would give a clean square trigger signal.  They're also quite fast at 25nS rise/fall times.

So, I started the prototyping whilst waiting for the IR sensors to arrive, to test the code I used a couple of switches to simulate the trigger sensors. 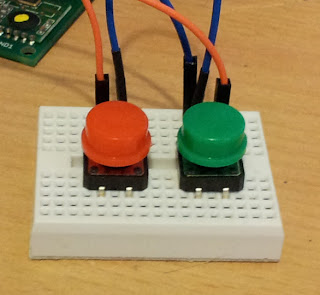 And used an oscilloscope to get an idea of what the real timing was and sorted out the code until it matched the oscilloscope measurements.

When the sensors arrived I used some plastic waste tube I found in the garage to mock up the triggers at 4 inches apart. 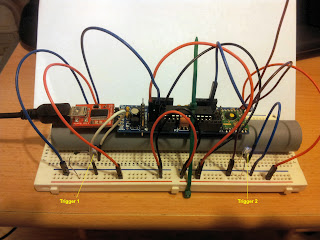 I tried out the sensors by dropping some objects down the tube and reading the results via the serial link to my PC, all seemed well and the times were in the ball park when compared to some calculations I'd done earlier.

..... Next steps, write the receiver code for a 4x20 LCD and also the GLCD and maybe look at a VB programme to receive the data on a PC and display the results.

Door/Window Sensor with an ESP8266

It's been a long time since my last post but I thought I would write up about my latest project - a door/window sensor using an ESP 8266...