A few days with the ipod touch

Well after a few days with the Ipod Touch I 've really started to like it even more, I've now installed a good ebook reader which allows me to read my existing Ebooks.

The application 'Books' is not a highly polished piece of software but after the hard work getting the book from a .lit file on my PC to a HTML file on the Ipod (about 1 hr) the actual reading experience is really good, much better than MSreader on my PDA.

The steps were: -
1. convert the lit file to html using a free converter "ABC amber lit converter"
2. Remove all the
tags using search and replace.
3. Separating the whole book into chapters which speeds up the book loading, this can take 1/2 hour for a big book.
4. Get the files onto the Ipod using the Ibrickr programme.

As I've said before I don't know why Apple are not exploiting the fantastic abilities of their device, maybe they plan to in the future.....
at December 11, 2007 No comments: 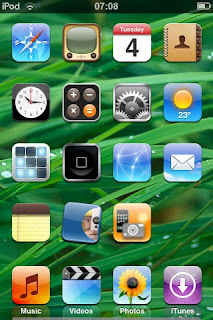 Well after much agonising about whether to go for the Iphone or not it suddenly occurred to me that I could get the full experience of the Iphone without the phone bit for a lot less money by buying the Itouch.

Well it's nearly Christmas so I chose the Itouch for a present and I must say I was absolutely amazed by this device, using is is an absolute dream.

Everything is so simple to use and setup, it detected my wireless connection and asked for the password and connected without any messing about in settings etc.

The screen is fantastic, even better than my hx4700 and I've always classed that as a great screen.

Once I'd unlocked it I got access to a huge list of third party applications, without even having to search round the net on my PC, it was all possible on the Itouch.

I installed the web mail, notes and google maps apps from the iphone so as long I as I have a WiFi connection I get my email.

I'm over the age of 40 and my eyesight is just starting to age and seeing all the text on my Imate Jamin can be a struggle and trying to increase the font size took a lot of research on the web and even then it wasn't brilliant do to the screen not handling some of the larger text very well.

Having said all that there are some issues which irk me to say the least such as the lack of memory expansion, in this day an age that is just STUPID!!!! COME on APPLE think of the consumer!

Those that like to fiddle with the settings and themes shouldn't be disappointed though as once it's jailbroken you can fiddle until your hearts content.

Another nice feature would be Bluetooth and a navigation application, with already having WiFi I wouldn't have thought it too difficult to add Bluetooth.

I think Apple missed a trick, with navigation, Bluetooth as well as the photo, video and music capabilities it would be a real killer device. (although it was probably a calculated omission)

I don't own an apple and I'm not really an apple fan but I can really say this device is a pleasure to use.

At last a Blog

Well I've messed about for a while thinking about a blog, I've done a web site, well out of date now, but at last it's time try blogging, here goes .....
at December 05, 2007 No comments: