Well it's been a long time since I started off this project and I've made a few changes along the way and a few people have had a go at making their own Chronos based on the entries in this blog, some followed the design and some incorporated elements of their own into the design to improve it.
There were a couple of the things I wasn't keen on with my design: -
So along came the Mark II with the intention of improving on those issues.

The main reason for the teardrop design was to fit in the electronic modules with the central tube so I needed to come up with a design where I could place the modules and battery around the perimeter of the tube whilst keeping the overall diameter as small as possible.

I also wanted to add a charging circuit inside the tube so there was only one part to worry about so you could just plug it into a phone charger to charge it.  If I could get all this inside the tube, along with a switch located at the same end as the electronics then it would be a big improvement IMO.

First test was putting the modules around the tube .... using Tinkercad I messed around with all the modules trying to fit them in. 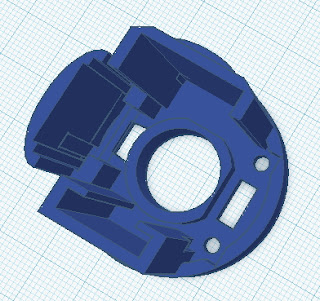 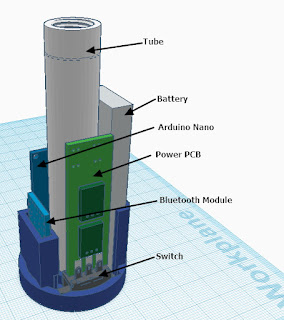 Having got them to all fit in a round base I set about figuring out the charging the battery and powering the Nano from the 3.6V battery as the IR receivers were specified to use 5V.

After a good Googling around for some modules I finally found some modules that fit the bill, one to convert 3.6V to 5V and another to charge a single lithium cell from 5V.  These module need to be pretty small and I wanted them to be on a single PCB to make wiring up the modules easy so I designed a PCB to mount them on and had the idea to attach the PCB to the switch which would be securely screwed in to the base.

The outcome for this design means that when switched on the 3.6V battery is connected to the DC/DC converter supplying 5V to the Nano, BT module and the IR beams, when switched off the battery changes to the output of the single cell charger module, which gets it's 5V supply from the nano USB connector therefore charging the battery.  Also all the supply connections for the modules are also on the PCB making it easier to wire up when assembling. 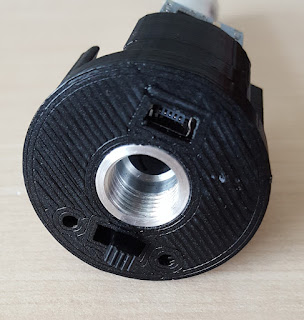 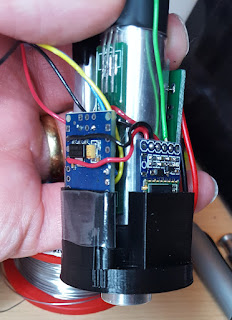 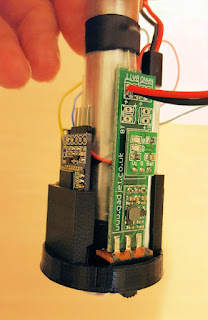 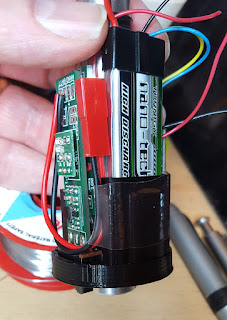 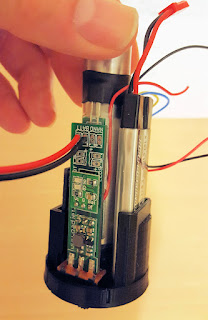 Bb sensor is build on phototransistors?

And where i can get full documentation of this project?

Tylko,
All the details required are in this blog, the differences between thisdesign and the previous designs are described in this post.

Feel free to ask specific questions in the comments if it's not clear.

Could you please post STL files for this enclosure?

Find them on thingiverse https://www.thingiverse.com/thing:2784926

I built your IR chrono and also made some minor changes to the App. Thanks for your help in the past.

I would like to ask for your input. Trying to find or build a magneto-sensor for a barrel mounted chrono to use instead of the IR sensors for the benefits of less interference and maintenance. There is already a commercial product out there that uses electromagnetic sensors. I am trying to reverse engineer the pick up sensor. Could you look at the last post by Tom S (me) which explains it all. Thank you for any assistance!:

Hi,
I had a look at the post but I don't have any answers for you I'm afraid, I use an inductive sensor for setting the height on my 3D printer which uses an aluminium bed, maybe one of these types of sensors may work although I'd guess it may not be quick enough for it's digital output to react, maybe you can get an inductive sensor with a pure analog output? maybe something used as an ABS wheel sensor on a vehicle? (magneto reluctance sensor?)

Hope this helps, if you find something then please feedback, the optical solution works fine for my 12ftlbs air rifle :-)

Penerjemah google mungkin telah mencampuradukkan beberapa arti.
berapa jarak antara sensor?
The google translator may have mixed up some meanings.
what is the distance between the sensors?

I like your DIY Chronos. Unfortunately the link for the code is dead. Can you reactivate it?

Hello,
I've updated the links, give it a try now.

Hmm the link is going to a Dropbox, but it says that the data was deleted?! Can you please check again. Thank you!

I don't know what to say, I've tested it a few times and it works for me, try copying the link and open it in another browser?
I do know that I had some issues in Chrome accessing Blogger.com this afternoon so I wonder if it this but the files are definitely there and the links work for me.
Let me know if you still can't access them and I'll sort out another way.

I checked it with Safari and with Chrome. Hope we are talking about the same things. I mean the link (Arduino Sketch) you posted in the "Chronograph completed - Finally".

I moved all my sketches to Onedrive, the link should now work.

now it worked! :) Thanks
one last question... is this the original version, or the one with the interrupts? I had a look at the sketch but I couldn't find the attachInterrupts... Sorry I am new to that... ;)

From what I remember, it was 5 years ago 🙄, the sketch with interrupts was no faster than without interrupts.