Over the years I've made a few projects all centred around the Arduino, in its many forms and more recently I've started to use the very useful ESP8266 device, both of these are happy to run on 3.3V (ESP8266 should be 3.3V).

As I use batteries to power the various project around the house and garden I've accumulated a number of different batteries, mainly Lithium Ion ones at 3.7V.
I use some 18650 cells from an old laptop battery that comprise two cells wired in parallel and some mobile phone type batteries that are thin and light.

I'm continually charging these batteries up and running them down and I had an idea the other day when I came across an old QI charge receiver I had used in a Samsung S4 to wirelessly charge the phone.

I wondered if I could connect the output to a lithium Ion battery charger PCB,  from China and stick the pad onto a battery, this would allow me to just place the battery on a QI pad to charge it up and even place the device using the battery on the pad to keep it powered/charging.


It was quite simple to remove the USB socket from the PCB and solder to the charge pad and connect to the battery.

After that I used some heat shrink tubing used for battery packs to hold it all together.
The final package can then be used to power the project. 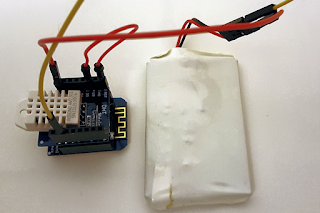 The next step is to 3D print a new case for the two 16850 cells to include the charge pad and PCB and look at using a 5V supercap and charge pad to power my temperature monitor project. 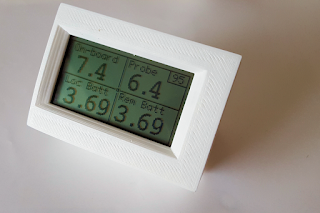 Following on from the first blog about the hot water heating control here's what I put together for the mounting. Whilst looking for a...