Using the power control circuit from the Wirelesse door/Window sensor I have designed a simple 3 button WiFi remote with the intention of controlling a couple of WiFi Switches for my TV and a Lamp.

Currently I'm using an aging 433MHz system which is slowly wearing out due to years of usage.

I realise there are many off the shelf solutions out there that I could buy and use but it wouldn't be as much fun as doing it myself although it would probably be alot quicker!

The basic principle of the supply circuit is that the LDO's enable pin is controlled by an OR gate, a positive trigger from one of the three switches fed via a diode, to stop the switch press affecting the other switches, triggers the output of OR gate which in turn enables the LDO and also switches the other OR gate High so the when the original trigger is removed the LDO remeaind enabled.

Once the LDO is enabled it powers up the ESP and one of the first things done is for the output controlling the gate to be switched High to keep the gate's output from being switched off, once the code has finished it's job then the output is switched low which causes the OR gate's output to go low and turn off the power to the ESP.

The Buttons are connected individually to the inputs on the ESP and also connected all together via diodes to the Trigger input circuit. 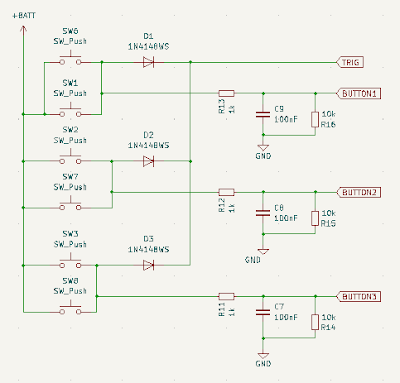 The Schematic shows multiple buttons because I allowed for two types of button to be used, 6mm x 6mm pushbuttons or 12mm x 12mm pushbuttons, you can also use SMD tactile buttons soldered to the footprint of the 6mm buttons.

The ESP connections are fairly standard with a Reset button and a Flash button. 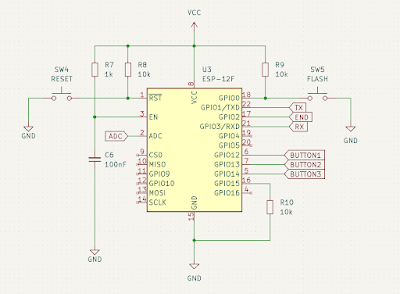 Here is the overall schematic for the projecy, this one has the additional Pull downs, R15, 15 and 16 that I forgot to add on the first PCB design.
Get the KiCAD files from Github - https://github.com/gadjet/WiFiButtons 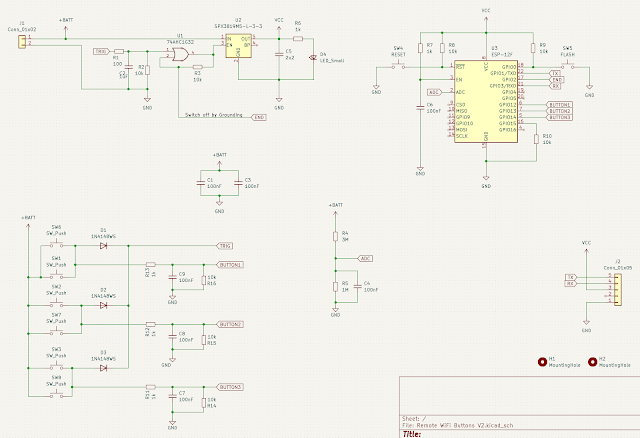 Get the KiCAD files from Github - https://github.com/gadjet/WiFiButtons

The Mod to add the Pulldown resistors

Unfortunately I forgot to add some pulldown resistors on the original circuit (have been added on the later PCB layout.

The following code sends an ESP-NOW message packet whenever a button is pressed comprising the Device ID, the MAC Address, the button pressed and the battery voltage.  Once the message has been sent the power is turned off by setting GPIO2 LOW.

Get the code from Github - https://github.com/gadjet/WiFiButtons

This Code takes the received data from the Transmitter and sends it to the Serial port.

Get the code from Github - https://github.com/gadjet/WiFiButtons

The point of the trigger circuit is to reduce the standby current as much as possible so the battery will last as long as possible, this configuration consumes around 1.5uA in standby and an average of 60mA for around 200mS when a button is pressed. 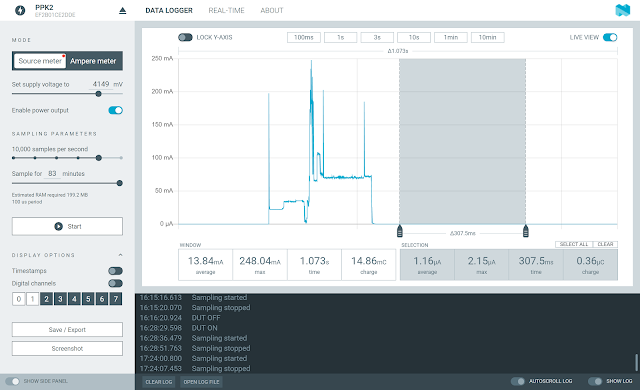 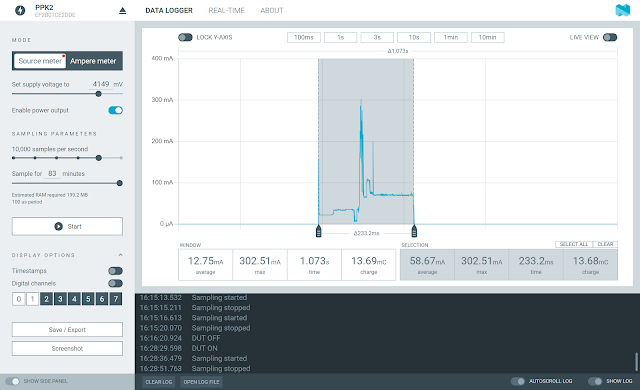 Which function has the extra circuits (cap and resistor) parallel to the buttons? Debounching?

Thanks.
Yes the resistor/Capacitors are debounce.